Nowadays, kids can be really picky with food.  Gone were the days where kids ate anything they were given or not have anything at all (other hungry siblings would gladly eat up extra portions).  There was a stage where Big One got so picky that he refused to eat what I had already cooked, insisting on going to a particular food store for a particular dish.  After some ranting from an angry Mummy, and some crying from a stubborn kid, Big One reluctantly ate his meal at home.

This went on for quite some time and I got so tired of forcing Big One, it was like forcing him to eat poison that I personally cooked.  Enough was enough!  I embarked on a new plan - getting Big One to cook his own meals!  I figured out that


This was one of the first dishes that Big One helped to cook.  From not knowing how to keep garlic pieces in the wok, he can now help to stir-fry stuff while I wash up some dishes without tossing the food everywhere.  If a little kid can cook this, anyone can too!

Posted by Nueyer at 5:17 AM No comments:


This dish is one of those that remind me of home, something that is often cooked by my Mum.  Once again, all it takes is a few simple ingredients, a few minutes of cooking and you are done!

Posted by Nueyer at 8:00 PM No comments: 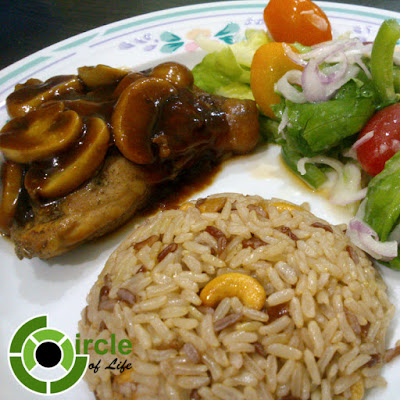 I love a good chicken chop with a simple salad, but sometimes I need to have some rice.  Instead of the usual plain rice, I added in some butter and some cashew nuts to the rice cooker and cooked it exactly the same way.  I was feeling a little fancy too, so some fresh mushrooms for the chicken chop and some sliced onions (for a little kick) and green pepper for the salad.  Yummy!!
Posted by Nueyer at 9:00 PM No comments:

Healthy homemade meals don't have to be time consuming.  All you need is a few simple ingredients, a tiny bit of cooking and you are done!  For this sandwich,  I used 2 slices of my homemade Chocolate Walnut Bread, fried an egg, sliced some tomatoes and avocado and washed a few leaves of lettuce.  It takes just a few minutes to assemble and you have a very healthy meal :)
Posted by Nueyer at 10:45 PM No comments:

We usually make our own pizza dough but once in a while, we use store-bought pita bread as the base.  So after all that pizza making, what do you do with the leftover pita bread?  Cut them into wedges, spread them out on a tray, bake them at 200 degrees Celsius in the oven for a while, and you get healthy baked pita chips!

Posted by Nueyer at 3:09 AM No comments:

Ever since we got a bread machine, I've been playing with ingredients so that we're not eating the same old bread every single day.  Add in some cocoa powder and walnuts, and out comes a chocolate walnut bread :)
Posted by Nueyer at 8:30 AM No comments:


I love food that can be cooked in the oven!  You just dump them in the oven, and all the work that you need to do is to flip it over a few times while it cooks.  While waiting, you can cosy up with a good book or watch some television.  No slaving in the kitchen :p

Posted by Nueyer at 8:30 AM No comments: